Does Green Tea Help With Diabetes?

May 5, 2018April 23, 2022 Alice A.HealthDoes green tea help with diabetes, Green tea and diabetes, What are the health benefits of green tea

Green tea is known for being a “super drink” because it is said to offer specific benefits for people suffering from diabetes. According to recent studies, green tea can actually benefit people with Type 1 and Type 2 diabetes and can also help those who are working to prevent the onset of Type 2 Diabetes.

Diabetes is a chronic medical condition characterized by the body’s inability to produce sufficient quantities of insulin, resulting in the abnormal metabolism of carbohydrates in the body and elevated levels of glucose in the blood.

Glucose is the main source of fuel or energy for the body. We get glucose when our bodies break down the carbohydrates that we eat or drink. Glucose is then transported into the bloodstream and distributed to the body cells to give them energy with the aid of the hormone insulin which is produced by the beta cells of the pancreas.

In an individual without diabetes, the pancreas upon sensing that glucose has entered the bloodstream will release the right amount of insulin so the glucose can get into the cells. But this system doesn’t work for individuals with diabetes because of the inability of the pancreas to produce insulin.

Diabetes can be effectively managed when diagnosed early. But when left untreated, it can lead to several complications that include kidney disease, ketoacidosis, high blood pressure, and stroke among others.

Green tea is consumed on a daily basis in dozens of countries worldwide. And unlike black tea, varieties of green tea are only minimally processed and are usually not oxidized at all.

Green tea is very effective in managing and preventing diabetes because it contains high levels of polyphenols, which are antioxidants found in plants. Epigallocatechin gallate (EGCG), the key polyphenol in green tea is known to be the main factor of the beneficial health benefits of green tea. EGCG helps sensitize the cells so they are able to better metabolize sugar.

Get your Green Tea on Amazon

People with diabetes have problems metabolizing sugar so insulin is needed to decrease the sugar. But with type 2 diabetes, the body becomes insensitive to insulin causing the blood sugar levels to go up. With EGCG found in green tea to help sensitize the cells, they are then able to metabolize sugar.

Other than helping to regulate glucose in the body, polyphenols in green tea help reduce oxidative stress and also cause widening of the arteries (vasodilation), which decreases blood pressure, reduces cholesterol, and prevents clotting. All the said activities of the antioxidant polyphenols can reduce the risk for heart disease, which is elevated in people with diabetes.

Other Health Benefits of Green Tea

Green tea has been used as medicine for thousands of years in China and throughout Asia and other than helping with diabetes, it also has the following health benefits:

The antioxidant polyphenol, particularly EGCG (Epigallocatechin gallate) works to intensify the levels of fat oxidation and the rate at which the body turns food into calories while its high caffeine content aids in burning fats and improves exercise performance.

2. Lowers the risk of cancer.

Green tea helps lower the risk of cancer due to its high content of antioxidants. Other than stopping cancer cells from growing and directly killing them, these antioxidants also seem to be able to prevent new blood vessels from forming within tumors that help cancer cells to grow rapidly and spread to other parts of the body.

Green tea has also been shown to help with wrinkles and the signs of aging which can be attributed to its high antioxidant contents and anti-inflammatory activities.

While the stimulants in green tea can keep you awake, they can also make your brain function better. Caffeine, the main stimulant in green tea when taken at the right dosage, provides a lift for most people without causing increased anxiety.

Some studies have shown that green tea aids in digestion and improves bowel movement. Green tea does this by reducing inflammation in the gut associated with ulcerative colitis and Crohn’s disease.

How much tea should you drink?

Studies have shown that in order to enjoy the health benefits of green tea, a therapeutic dose of polyphenols between 200 to 1000 mg per day is recommended. So how many cups should you drink? It all depends on several factors such as: how the tea leaves were processed prior to drying, the geographic location, and growing conditions, and the preparation methods.

Polyphenol values may vary from 5 mg to 180 mg per cup so you may need to drink 4 to 5 cups of traditional green tea per day to be optimal. 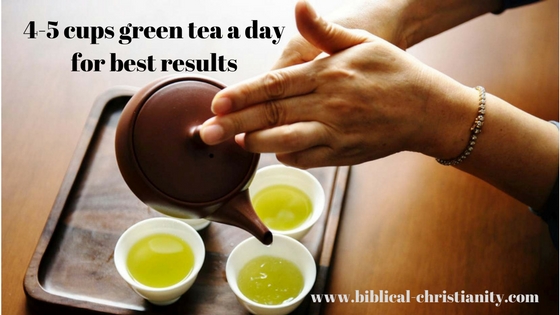 Green tea is a very healthy beverage that can be very useful for everyone who suffers from diabetes by stimulating the production of insulin, which will then control the sugar levels and converts the nutrients from the food into energy to be utilized by the body.

However, green tea has various properties that can affect how it affects you, depending on several other factors which may vary from person to person. So before deciding to change your diet and incorporate green tea into it, it’s always best to consult your doctor.

Should you have any comments or additional insights, please leave your comments below.

24 thoughts on “Does Green Tea Help With Diabetes?”